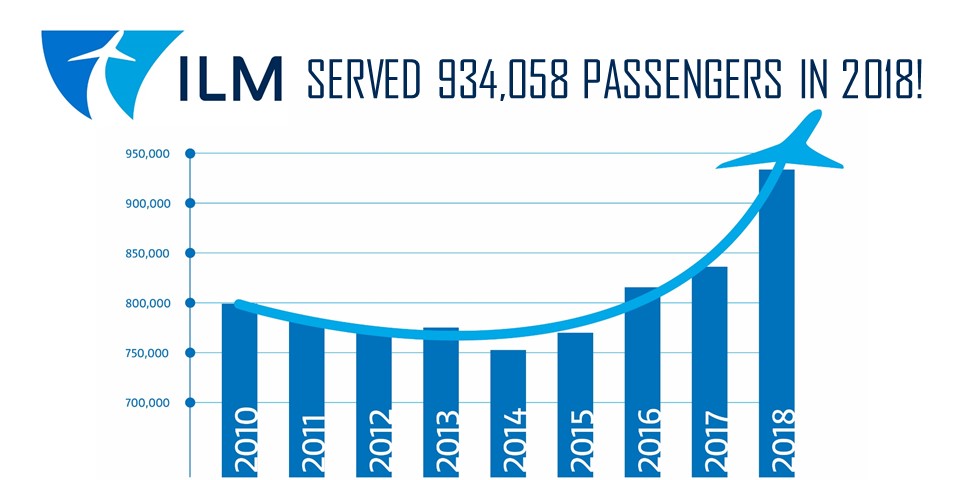 Throughout the calendar year, ILM’s growth was propelled by the addition of a third carrier, United.  The airline began nonstop service in April 2018 between ILM and Chicago O’Hare (ORD) as well as Washington-Dulles (IAD).  American Airlines expanded their nonstop service as well, with new service between ILM and Chicago O’Hare during the summer season, as well as year-round daily nonstop service to Reagan National (DCA).  American grew service again at the end of 2018; expanding its nonstop seasonal service to Dallas Fort Worth (DFW) to daily year-round service in December.

“2018 has been a year of unprecedented growth,” stated Julie Wilsey, Airport Director.  “We acknowledge the investment our airline partners have made at ILM.”  Through Wilmington International Airport’s three network carriers, (United, American Airlines, and Delta) travelers can access 8 nonstop destinations, 7 hubs, 6 international gateways, and 310 destinations with just one stop. “With our terminal expansion underway, and the continued support from our growing community, we look forward to our next milestone of 1 million passengers,” Wilsey shared.